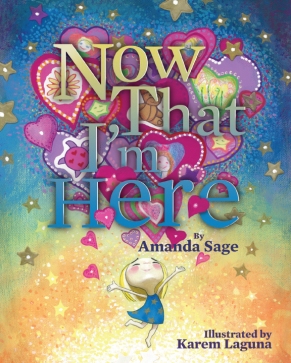 Now That I’m Here was written as a tribute to a very special little girl, Kate Drury, who passed away on November 30, 2015 at age eight. She died of a very rare form of mitochondrial disease called sideroblastic anemia, immune deficiency, fever and developmental delay (SIFD).

SIFD was first diagnosed in November 2011, when doctors at the Children’s Hospital of Eastern Ontario (CHEO) and Boston Children’s Hospital confirmed that Kate, who was only four years old, suffered from this rare form of the disease. Since then, several other cases have been diagnosed worldwide, all in young children.

Now That I’m Here was released in September 2016 during Global Mitochondrial Disease Awareness Week. The book is available for print-on-demand orders, in English and French (as Toujours ici). It’s a very personal story about young Kate; it also touches on universal themes, offering a way for families to teach their children about death, illness and disability through a sensitive and uplifting book.

Eight-year-old Kate is the hero of her own story, one where wishes become truth.  Her imagination is the vehicle through which she’s liberated from the limitations of her physical self.  Passionate about life and surrounded by the unconditional love of her family and friends, she embraces each moment to the fullest.  Her indomitable spirit allows her to soar above the constantly shifting landscape of chronic illness and disability.  Now That I’m Here inspires children and adults alike to celebrate life despite adversity.

All profits from the purchase of this book go to CHEO

DISCLAIMER: I was generously gifted a copy of this book for review.